Zoom Challenged Students and Schools in the age of COVID-19

I regularly handle school-student discipline cases for students and their families. Everything from Title IX university matters to public school drug trafficking cases and the enormous gulf of legal issues in between. COVID-19 has changed so much about education law and special education law matters, for example, this recent true-life and legally fraught Zoom incident: 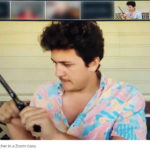 So, imagine you are a 16-year-old student sheltering in place at home with your family and working online with your school using Zoom, the ubiquitous software used by most schools for what is euphemistically called distance learning. And while trying to stay focused on your school-issued Chromebook, or another computing device, during a live, online teacher-led lecture in your AP American History class you happen to glance at the online image of a classmate and see the video of this still photo…

Though Fletcher Chance is presumably far older than our fictional 16-year-old, this photo of him was taken from the recent video made during one of his school’s frequent online Zoom classes. Fletcher is a law student and the president of the Harvard Law School’s, Federalist Society where he is enrolled. Taken last Wednesday, April 2, 2020, this image has been widely reported in the media as but a single moment of the 15 minutes in which Fletcher was engaged in cleaning, oiling and dry firing the handgun he held and showed off to his classmates and teacher.

While there is abundant law on the subject of student rights and free speech, the right of assembly and the 1st Amendment protections of all students, there is no question about what would have happened had this or any student tried this stunt in an actual school. The police would have been notified and in all probability, the student would have been arrested very quickly. As well, the school, any school, would have been placed in immediate lockdown by the administration, all classes would be canceled, the students and staff subject to emergency evacuation and the police presence on campus would surely have been massive.

Absent the special needs conduct of certain disabled youth, whether it be at Harvard’s Law School, or your child’s local high school, guns are banned and students found in possession of firearms are severely disciplined, and often expelled from school. Moreover, there are no states in the US to my knowledge that would allow any student, regardless of age, to avoid prosecution for such dangerous conduct on campus. But how about when guns are brought out and brandished during you kid’s Zoom classes?

While Harvard mulls over its options, it and virtually ALL SCHOOLS could have and surely most by now, would have, disciplined Mr. Chance for his outrageous behalvior. The fact that the class was held online should have nothing to do with the school’s response to the gross and intentional student misconduct of such an inflammatory nature. No, he could not be placed under arrest, unless he had specifically threatened to use the gun against others but he could certainly be subject to significant discipline including suspension and expulsion.

Whoever said kids have it easier than the older gen is well, a little behind the times, don’t ya think?